Collection of customizable, free digital signage templates for every use case

Check out how companies succeed with Screenfluence

Ideas, tips and resources for digital signage in every industry 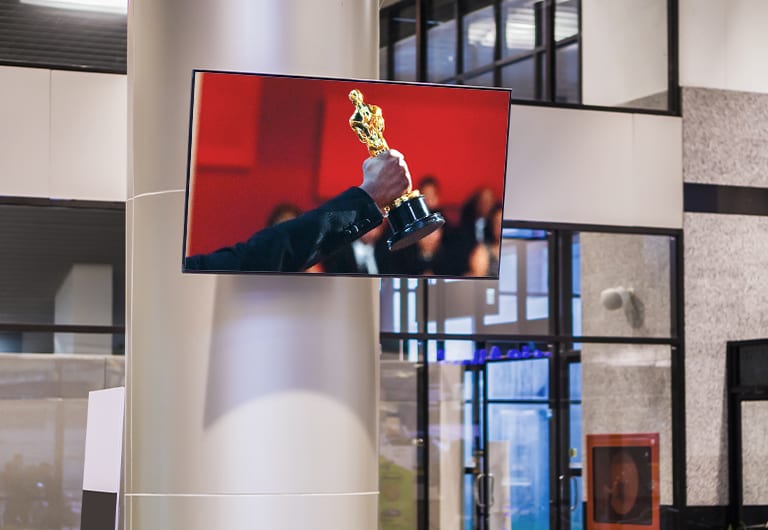 In order for your digital signage content to be engaging, it must be relevant to its viewers. When you use arbitrary visuals with no specific connection to the world, your messages are bound to be lost.

Use popular phrases and quotes from film and television.

As we’ve just demonstrated, a famous reference from a well-known pop culture source is bound to gain attention. “Heeeeere’s Johnny!” was popularized by Ed McMahon for almost three decades. The catchphrase was used to introduce his co-star and the host of “The Tonight Show”, Johnny Carson. However, the phrase took an entirely new life when bellowed by Jack Nicholson’s iconic Jack Torrance character from the famed horror flick, The Shining.

We’d imagine that a “Heeeeere’s (fill in the blank)” used in your messaging would garner a good deal of intrigue from onlookers. The introduction of just about any new product or service would be strengthened by this inclusion in your digital signage messages.

“Show me the money” and “You had me at hello” are two hugely popular movie references in their own rights – and they both come from the same flick. Cuba Gooding Jr. and Renée Zellweger had the honours of saying each line respectively in 1996’s Jerry Maguire. In what ways could you use either phrase to draw attention to the messages on your digital signage? Offering a new career opportunity? Promoting a new telecom feature?

Not everything displayed on your screens necessarily needs to be directly related to your organization. You can engage viewers by providing live updates about highly relevant goings-on in the world of entertainment, sports and local news.

For example, the Academy Awards took place in Los Angeles last month. Just as it always does, the winners and losers of the event were big-time water cooler topics at work the next day. Picture the interest your digital signage would garner if it displayed such information as the fact that the Korean dark comedy thriller, Parasite made history by becoming the first-ever foreign-language movie to win the Oscar for Best Picture.

Also taking place last month was Super Bowl LIV. You’d be hard-pressed to find an individual who either didn’t watch the NFL’s annual championship game or at least wasn’t intrigued by the halftime show and the broadcast’s commercials. There are far worse ways to attract eyes to your digital signage than to display the final score of a big game. Congratulations Kansas City Chiefs!

Throw up hashtags on your digital signs and monitor your social media buzz.

Let’s say, for example, you decide to advertise an upcoming spring sale using your digital signage. If each of your screens includes the hashtag #SuperSweetSpringSale in addition to your social media account handles, you’ll be given a clear route to discovering just how engaging and impactful your digital signs can be.

As Paton reveals, “for a global campaign, popular fitness club Equinox measured the number of social media interactions and impressions with their hashtag from each of the 73 locations. Just four of those locations…generated more than 65% of all the campaign’s impressions. That’s 118,593 impressions at four locations versus 40,335 impressions at the other 69 venues without digital signage, to be precise.”

No matter the industry you work within, displaying a message with two words (it could be the name of your business, a slogan, tagline or motto) can be done in a very inventive way. Simply place the first two letters of the first word inside a green box.

Place the second word just underneath, with its first two letters trapped inside another green box. Ensure that the boxes are placed diagonally apart. Now you are paying homage to the extremely popular AMC crime drama series, “Breaking Bad”. Don’t think for a second that your visual reference to the show’s famed logo will go unnoticed.

Want something a little more light-hearted? Opt for big blue bubble letters a la “Family Guy”. You get the picture. The options are endless! For more information about how Screenfluence can help you to benefit from using digital signage, please don’t hesitate to call us at 1-844-772-7336 or email us at info@screenfluence.com.

Why You Need Digital Menu Boards at Your Restaurant 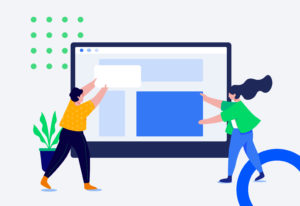 Running Out Of Digital Signage Content Ideas? Here Are 10 Templates To Inspire You

Screenfluence is a proprietary cloud based Digital Signage Content Management Software. We provide businesses with the ability to remotely manage and showcase their digital content on any display.